Diamonds are a girl’s best friend….that is if you are given any

Last week I was offered my very first job as a make up artist. When asked what the job was, I was given a very blasé answer, “Male Models, just make them look alive!” This filled me with nerves – I had never worked on men before. The closest I had come was giving my boyfriend a black eye, using makeup – of course.

My brief was to be at Tiffanys and I had exactly 1 hour to complete… who knows how many faces and would they be just faces? They could be whole torsos (not that I would be complaining). Luckily that week at CBMA we were doing fashion makeup taught by the lovely Gina Blondell and I asked her as many questions as I could think of. She fully put my mind at ease and gave me tips about making up men, with the emphasis on moisturizer, a dab of concealer and maybe a tweeze of a few unruly hairs. I felt a lot more confident. 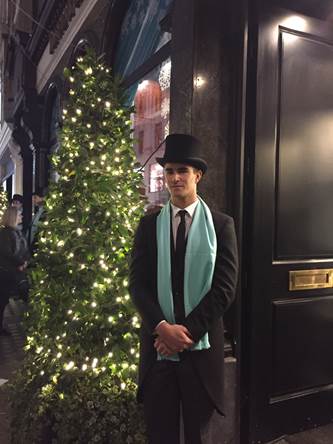 Monday arrived and with it my nerves. I packed up my kit and set off to an area of London that normally I waltz through, gazing longingly into windows. But today I was going inside. I was taken up to a boardroom filled with every possible accessory in the iconic Tiffany blue and told to set up wherever, but on pain of death not to get makeup on anything! As I was laying out my kit I realized this would be the first time I couldn’t just wipe off the make up had done and change it! I did not have long to dwell as my men arrived looking incredibly dapper in their top hats and tails (unfortunately, no torsos in sight). The first one took his seat in front of me and looked at me with utter trust and confidence that I knew what I was doing. I realized I wasn’t nervous anymore and that I could do this. All seven men past through my hot seat in under 50 minutes, with no hiccups, barring one, when one of my models mistook what I what I said about plucking his eyebrows and thought I just wanted to touch them. He was most alarmed when I raised my tweezers. But luckily took it in his stride and said his girlfriend would be so pleased.

The event seemed to be a great success. I hung around for what turned out to be the Christmas unveiling to make sure everyone did indeed look alive, which luckily they did.

So, even though this is early November, if Tiffany can say it. I can say it: “Merry Christmas to all, and to all a good night. “